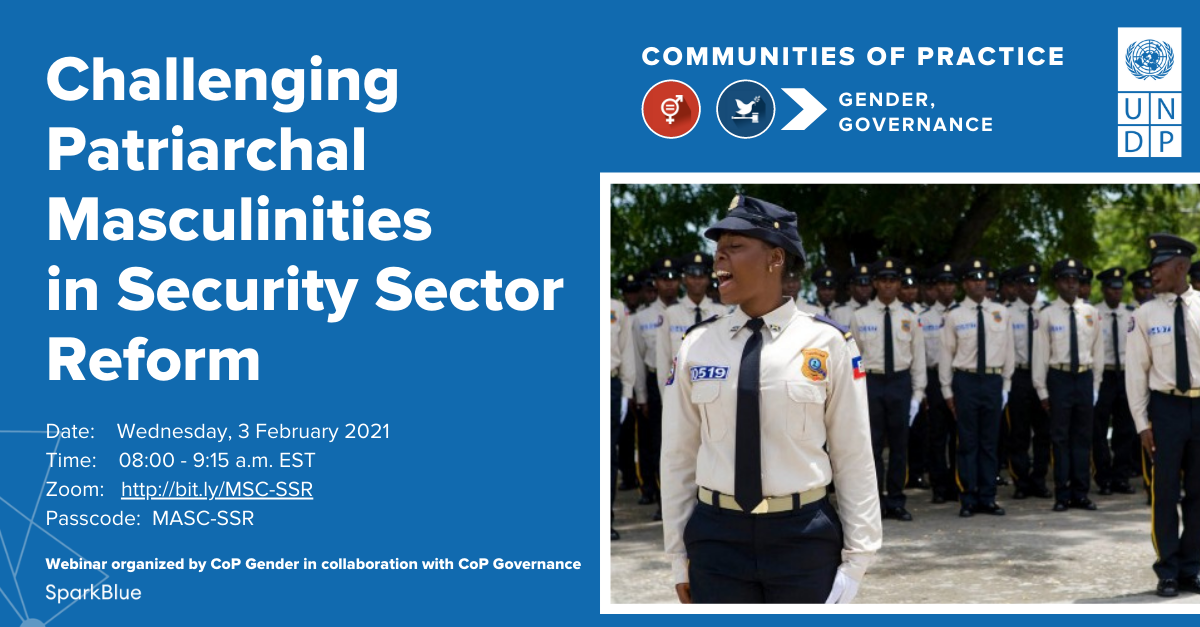 Please ensure your Zoom desktop client and mobile app are updated to version 5.3.0 or higher.

​UNDP Gender Team, in collaboration with ROLSHR team, is delighted to invite you to a joint workshop/webinar on "Challenging Patriarchal Masculinities in Security Sector Reform" on Wednesday, 3 February at 8:00 - 9:15 AM EST. This session will explore gender bias in the field of security sector and provide an overview of conceptual frameworks and approaches to transform masculinities.

While efforts to integrate a gender transformative approach to Security Sector Reform (SSR) processes have been developed in recent years, patriarchal masculinities continue to be deeply embedded in institutional policies and practices. Gender remains a key determinant of the security risks that women, men, and people of different gender identities face, as well as the degree to which they are able to access security and justice services. A 2018 review of UN peacekeeping operations showed that only 10.8 percent of UN police and 4 percent of UN military personnel are women. Male-dominated law enforcement institutions in many countries fail to enforce current laws on violence against women. Sexual violence is perpetrated by military forces not only against civilians, but also against military personnel themselves; a 2016 survey estimated that 27 percent of women in the Canadian armed forces face sexual abuse during their career. The UN Secretary-General’s 2015 Global Study on the Implementation of United Nations Security Council Resolution 1325 found that “cultures of militarized masculinities create and sustain political decision-making where resorting to the use of force becomes a normalized mode for dispute resolution.”

The Covid-19 pandemic has further exposed the structural and systemic fault lines of militarized masculinities. Some governments have pursued a heavily securitised approach to the pandemic in which security agencies have abused their position of authority and acted outside the rule of law. In Kenya, for example, the government’s Independent Policing Oversight Authority received numerous complaints of police violence since a curfew was imposed in late March 2020, including shootings, assault, general harassment and sexual assault.

As part of UNDP’s Targeting Men, Transforming Masculinities (TMx2)* initiative, this webinar will explore gender issues in the field of security sector reform, provide an overview of conceptual frameworks and approaches to transform masculinities and will serve as a platform to share opportunities, experiences and lessons learned. Through this session, UNDP practitioners and Country Offices who are interested in applying/replicating TMx2 approach into their future support to SSR processes will explore lessons and challenges,and reflect more broadly on the impact of socially constructed norms on the security needs of women, men, and people of different gender identities in prevention, transition, and post-conflict settings. During the interactive webinar, there will be a dedicated session for participants to comment and reflect on the following questions:

Q1: How can we build and maintain the support of senior leadership within the security sector for gender transformative reform initiatives?

Q2: What lessons are we learning about how to change the patriarchal cultures of security sector institutions?

*The Targeting Men, Transforming Masculinities (TMx2) agenda is an approach to understanding the workings of patriarchal masculinities and addressing their harmful impacts to support a more broad-based, equitable and sustainable recovery.

Hi everyone, you can watch the recording here: