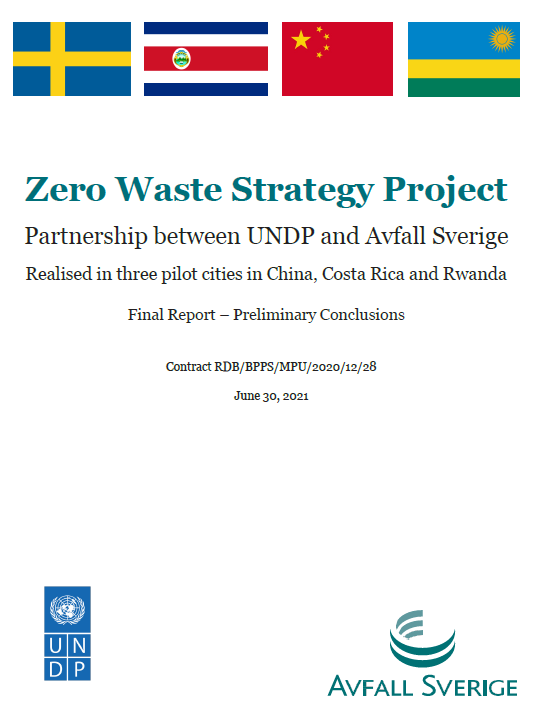 The Zero Waste Strategy Project, with the aim of advancing sustainable waste management, with the target of zero waste, has involved more than 25 municipalities on four different continents during the spring of 2021.

The project started as an agreement between the United Nations Development Programme (UNDP) and the Swedish Waste Management Organisation, Avfall Sverige, and set out to deliver expertise for the improvement of waste management in three pilot cities: Tianjin, in the Republic of China; five municipalities in the Great Metropolitan

Avfall Sverige was supported by five of its members who were responsible for the contact with representatives of the pilot cities: Scavi for the pilot city Tianjin, China; Vakin for the pilot municipalities in Costa Rica; Gästrike Återvinnare for the pilot city Kigali in Rwanda; VafabMiljö for issues regarding planning for training; and, the City of Gothenburg for the preparation of this report.

Unsurprisingly, the project result was affected by the Covid-19 pandemic and the digital constraints of the cooperation between countries. That being said, the project has been able to identify challenges and opportunities for a more sustainable waste management, as well as a brief analysis of relevant plans for the sector in all pilot cities.

Waste management in the pilot cities and municipalities still involves depositing large quantities of solid waste in landfills. The cities and municipalities have achieved varying degrees of controlled landfilling, meaning that the environmental consequences will be felt sooner for some and later for others. Issues with gas emissions, leachate, and other polluters from landfills will have to be addressed in all pilot cities.

The effectiveness of the waste collection for different waste flows differs greatly between the cities and municipalities. The Tianjin Eco-City has been working towards becoming a Zero-Waste City for several years through measures like recycling points for the citizens. Meanwhile, collection coverage for different waste streams is low in the five cities municipalities in GAM, and even more so in the City of Kigali. Waste Management Plans (WMP) are key to identifying waste flows, setting targets for waste reduction in accordance with the waste hierarchy, and to delegate responsibility between stakeholders. The existence of WMPs and their level of detail varies between the cities and municipalities.

Avfall Sverige suggests concrete projects to be considered for issues which have been identified in areas such as: inter-municipal collaboration, strategic waste management planning, transfer of experience, and enhancement of the competence in various institutional as well as societal sectors. Lastly, this Final Report – Preliminary Conclusions gives an insight into the establishment of a national waste management association.